ABTA & ATOL Protected  - 100% Financially Protected | Flexible Cancellation Policies | Plus, book a seven night cruise in an Ocean View or above by 8pm 26th April 2021 and receive a FREE John Lewis Gift Card worth up to £250

Book today and earn up to £131.58 off your next ROL Cruise booking

Cabins on decks 4, 6, and 7 that sleeps up to two people, with a double bed or flexible sleeping arrangements, kettle and TV. 9 - 15 m2 No window Bathroom TV Double bed 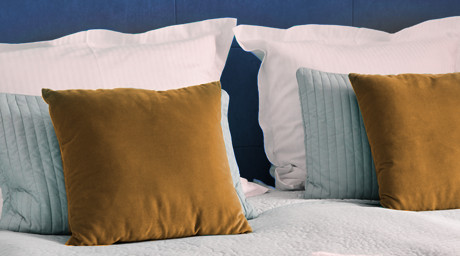 Cabins on decks 6 and 7 that sleeps up to two people, with limited/no view, and double bed or flexible sleeping, kettle and TV. 11 - 12 m2 Limited view Bathroom TV Double bed

One or two room suites on deck 7 that sleeps up to two people, with a TV, coffee making facilities, minibar and private balcony. 20 - 23 m2 Window Bathroom TV Double bed

One or two-room suites on decks 7 and 8 that sleeps up to two people with a TV, seating area, dining table, coffee making facilities, minibar and some with bathtub. Some also come with scenic bay window or a private balcony. 32 - 37 m2 Window Bathroom TV Double bed

Hurtigruten recently announced that three of its ships will be transformed into hybrid-powered vessels. MS Trollfjord will be renamed to MS Maud and undergo hybrid installation, transforming into a premium expedition cruise ship during early 2021. Using natural Scandinavian materials such as granite, oak, birch and wool, all public areas will be redesigned to create a relaxed and stylish look and feel. All cabins and suites will be completely refurbished. Hurtigruten’s signature Science centre will also be added, packed with state of the art technology and high tech gadgets.

MS Maud has been designed to take you on an expedition of the Norwegian coast in maximum comfort, equipped for a sustainable and memorable expedition. She is an ice class 1C ship equipped with advanced technology that makes her exceptionally well-suited for expedition cruises in Norway. 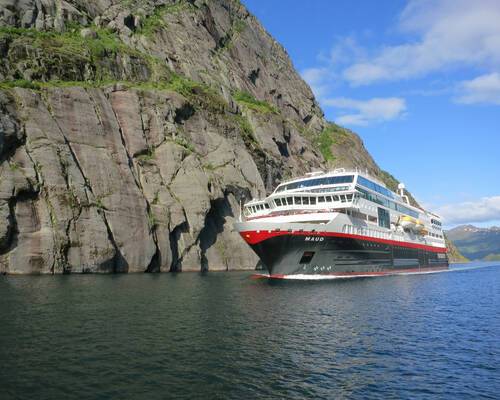 Hurtigruten and Reader Offers Limited Agency booking conditions apply. Prices are per person based on two adults sharing, except single cabins, may increase or be withdrawn at any time. Offer applies to new bookings only. Ports may require a tender. Tours are subject to change. Additional excursions must be booked at least 28 days prior to departure. Please note, this voyage may not be suitable for guests with mobility restrictions. Weather, sea & ice conditions have a great influence on the programme and schedule. Safety is always the priority and the ship’s captain will decide on the final sailing schedule during the voyage, therefore, the itinerary is subject to change. Additional excursions will incur a charge. Drink inclusions are subject to the cruise line’s T&Cs. Drinks are only included with lunch and dinner. WIFI is subject to the cruise line’s T&Cs and cannot be guaranteed. *Please Note - Complimentary Wi-Fi on board - Be advised that Hurtigruten will sail in remote areas with very limited connection. Streaming is not always supported.* Wildlife sightings are not guaranteed. Itinerary is subject to change. *Please note: Some grades may have upper/lower berths, a fixed double bed and/or a restricted view.*  Cruise Miles T&Cs apply. E&OE

John Lewis Gift is based on one per booking, for UK mainland addresses only when booking an Ocean View cabin or above by 8pm 26th April 2020.