Up to 22 FREE Shore Excursions*

Book today and earn up to £136.98 off your next ROL Cruise booking

Your current viewing preference is:
Per Person Pricing

A trailblazer in the exclusive world of all-suite, all-balcony ships, Seven Seas Voyager exceeds even the loftiest expectations for luxury. She exceeds even the most discerning travellers’ expectation of luxury. Considering her size, the amenities found on board are surprisingly plentiful and include four main dining venues where you can dine wherever, whenever and with whomever you choose. With 447 international crew members attending to a maximum of 700 guests, personal service is exceedingly indulgent throughout. 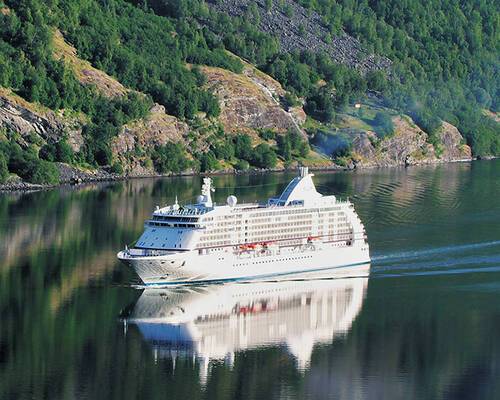 Do I need a COVID-19 vaccine to travel aboard a Regent Seven Seas’ cruise ship?

What is included in the cruise fare?

Yes, every ship in the Regent Seven Seas Cruises fleet has wireless access to the internet.

Should I tip on board?

There is no need - all gratuities are included in your cruise fare except for services from Serene Spa & Wellness™.

Yes. During the day, casual wear is appropriate for daytime both on board and ashore. Casual wear consists of jeans, shorts, t-shirts and tennis shoes. After 6pm, Elegant Casual is required. For ladies, this includes a skirt or slacks with a blouse or sweater, a pantsuit or dress; slacks and a collared shirt for gentlemen. Casual wear is not to be worn at dinner, with the exception of dining at the Pool Grill and on the final evening of the cruise.

Where can I store my valuables?

Each suite is equipped with a personal safe with an electronic combination lock.

What health & safety measures are on board Regent’s ships?

Booking conditions of Regent Seven Seas (ATOL10297) and Reader Offers Limited Agency terms of business apply. Fares are per person based on two adults sharing, except single suites, may increase or be withdrawn at any time. Offers apply to new bookings only. Savings is based on two adults sharing a suite. Ports may require a tender. Some suites are on a guarantee basis. 6★ refers to the cruise element. Regional and Premium Class flights may be available on request and will incur supplement costs and may require an additional overnight stay. Flights may be indirect. Unlimited Wi-Fi service cannot be guaranteed and is subject to the cruise line’s T&Cs. FREE unlimited beverages are subject to the cruise line’s T&Cs. FREE gratuities do not apply to some services, please see cruise line T&Cs. Free shore excursions exclude Regent Choice Excursions and private arrangements. Some shore excursions will be unsuitable for guests with mobility restrictions. Shore excursions mentioned are subject to change and can be booked up to 365 days prior to departure - depending on suite grade. Wildlife sightings are not guaranteed. All-inclusive refers to the cruise element only. Free extended Exploration land tour campaign for South America sailings which is valid between 1st – 30th September 2021. Normal Cruise Miles terms and conditions apply. E&OE.

Our ABTA membership and ATOL license protects your holidays booked through ROL Cruise, so you can book with confidence knowing you are fully protected. *Please note ATOL protection is only applicable to Fly Cruises*

Champagne Gift Box is based on one per booking for UK mainland addresses only when booking an Ocean View or above by 8pm 20th September 2021.