Included activities on board & ashore*

Book today and earn up to £473.98 off your next ROL Cruise booking

MS Roald Amundsen is the first hybrid ship to join the Hurtigruten fleet. With new and environmentally sustainable hybrid technology, she reduces fuel consumption and cuts CO2 emissions by sailing with electrical propulsion. Electrical propulsion is a great benefit to the environment and also enhances the impact of experiencing nature meaning you can travel to the most spectacular destinations in the most sustainable way. 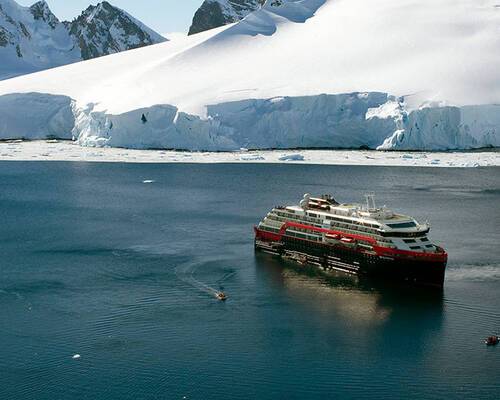 Hurtigruten and Reader Offers Limited Package Holiday booking conditions apply. Fares are per person based on two adults sharing, except single cabins, may increase or be withdrawn at any time. Offers apply to new bookings only. Ports may require a tender. Regional and premium class flights may be available on request and will incur supplementary costs and may require an additional overnight stay and may be indirect. If the named hotel is unavailable a suitable alternative will be provided. Star ratings are ROL Cruise classified. WIFI is subject to the cruise lines T&Cs and cannot be guaranteed. Savings are based on two adults sharing. Tours may not be suitable for guests with mobility restrictions Tours are subject to change and an additional charge may apply. Additional excursions must be booked at least 28 days prior to departure. Weather, sea & ice conditions have a great influence on the programme and schedule. Safety is always the priority and the ship’s captain will decide on the final sailing schedule during the voyage, therefore the itinerary is subject to change. Flights may be based on indirect services and are currently out of date range. Flights are subject to schedule changes and may be based on indirect services with flights arriving same day or overnight. Flights will be confirmed closer to departure which may affect your overall holiday duration and an additional overnight hotel stay may be required. Drinks are only with meals on board and are subject to the cruise lines t&c’s. Wildlife sightings are not guaranteed. Cruise Miles T&Cs apply. E&OE.

Our ABTA membership and ATOL license protects your holidays booked through ROL Cruise, so you can book with confidence knowing you are fully protected. *Please note ATOL protection is only applicable to Fly Cruises*